Everything you need to know about cold vulcanization 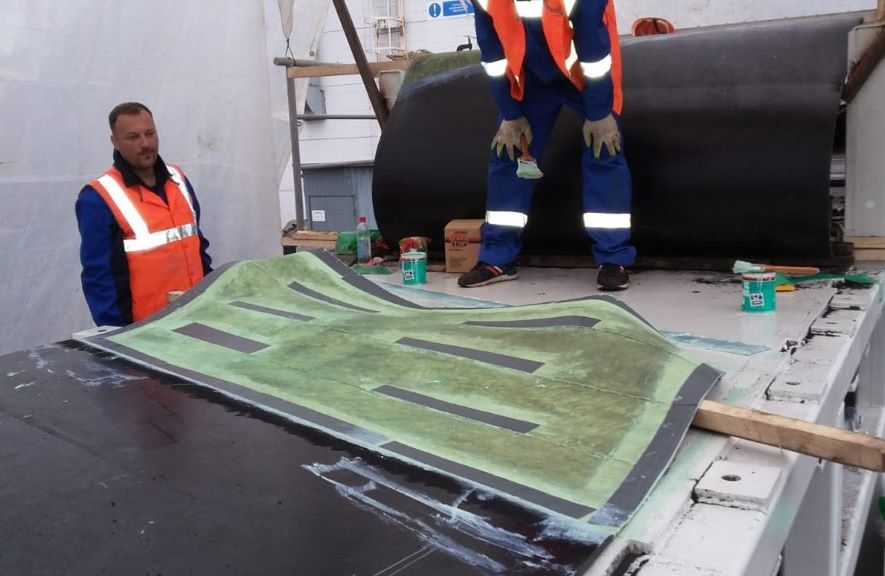 Cold vulcanization is a method of joining conveyor belts using a specially formulated low temperature curing adhesive mixture. This method differs from hot vulcanization in that all the necessary work on joining the tapes can be carried out without a vulcanizer.

The method of cold vulcanization of a conveyor belt is a fairly budgetary, high-quality and fastest option for repairing and splicing belts.

The history of the cold vulcanization process

This type of vulcanization is directly related to a material such as rubber, which mankind began to use after the discovery of the New World by Columbus. But the method, which today we usually call vulcanization, began to be used en masse only after 1839. It is worth noting that it was discovered absolutely by accident, after rubber mixed with sulfur spread over a heated oven. As a result, rubber was formed. This material and method was discovered by American inventor Charles Nelson Goodyear.

A few years later, A. Parks developed a cold vulcanization method, which involved the use of sulfur chloride S2Cl2. This method began to be used during the production of thin-walled objects, such as children’s toys. It should be noted that in terms of properties, these products are much worse than products that are produced using the hot vulcanization method.

In 1932, S. Lebedev made a discovery, thanks to which it became possible to produce rubber from artificial rubber. This technology is still successfully used today. Rubber having such high quality indicators competes with other types of materials of modern chemistry.

The Benefits of Cold Cure

All the advantages listed above prove once again that this type of repair requires a very short period of time. Within a couple of hours, the production process can be fully resumed. Conveyor downtime is significantly reduced. During the repair process, there is no need to use an expensive vulcanizing press, which saves money. In addition, for docking, you only need a hand, grinding tool, as well as glue. A joint repaired in this way will serve reliably until the tape itself wears out.

In the process of cold vulcanization, we use only high-quality foreign adhesive mixtures and two-component adhesives, which makes it possible to achieve maximum strength. In terms of strength, this method is no worse than mechanical connectors, but the latter have a negative effect on the drive drums.

Repair of conveyor belts using the cold vulcanization method is one of the most popular, as it can significantly increase the efficiency of the conveyor. In addition, using this method, it is possible to join tapes in places where, due to limited space, it is impossible to use a massive vulcanizer. Also, this method is often used in mines, because there it is forbidden to connect the tape with a mechanical connection due to the high level of explosiveness.

To comply with the technology of this process, a list of the following tools and materials is required: a set of roughing and hand tools, a cleaner, a two-component adhesive and a self-vulcanizing rubber compound.

Experienced employees of TOV NVP “Ukrenergopostach” will quickly and efficiently perform all the necessary repair work related to the joining of conveyor belts, and, if necessary, use the cold vulcanization method for this. Jointing of tapes having a width of more than 1400 mm should be carried out only by cold vulcanization.

Everything you need to repair conveyor belts from a direct supplier!

TOV NVP “Ukrenergopostach” is engaged in professional repair of conveyor belts and lining of conveyor drive drums throughout Ukraine. An accompanying line of professional activity is the supply of the necessary tools, components and devices for the repair and maintenance of conveyors.

You can buy from us: